Here’s a writing style issue that I’ve seen rather frequently lately, both while editing and while out in the wilds of the real world. And although some would argue it isn’t a rule and therefore isn’t required, I speak on behalf of all readers when I say that following this suggestion makes your writing immeasurably easier to read. It’s the idea of parallel structure (also referred to as parallel construction or parallelism). It’s a lovely term to toss around because it sounds brainy, but it’s really pretty simple to understand, once you see an example.

Happily, I just came across a terrific demonstration on my Twitter feed. Thanks so much to David Pogue, whom I see often on CBS Sunday Morning, for posting this:

Dear Marriott: There’s a small grammar problem on your in-room brochure. Can you spot it? (Hint: Parallel structure.) pic.twitter.com/r2VWmJWZwP

Do you see the problem? It’s actually fairly easy to miss, because our brains usually fix it subconsciously, like when we read transposed letters as if they weren’t transposed. Here Marriott has listed three things, but they don’t exactly all go together, at least not the way the line was written.

The rule of parallel structure is that all items in a list or series need to be written in the same grammatical form. But don’t worry, you don’t necessarily have to be able to identify grammatical forms. You can usually tell if the items are in the same form if they each work with the same word or phrase to which they’re attached.

Here are some options to make the list parallel:

Whether or not those suggestions work as well from an advertising standpoint is outside of my wheelhouse, and of course ad campaigns aren’t exactly renowned for their perfect sentence structure, but I thank Marriott and David Pogue for supplying the excellent example.

Always confirm that each element of a list within a sentence or group of sentences is in the same form. Better yet, make sure that you have a professional copy editor review your work before you publish it. If you don’t, you may end up with someone from CBS Sunday Morning posting your error on Twitter. No one wants that.

Have you ever seen alot written as one word? I don’t mean allot, similar to allocate. I mean alot, one word, instead of a lot, two words, meaning quite a bit. Just in case you weren’t certain, alot isn’t a real word. Don’t be surprised if you thought otherwise; it shows up, well, a lot, especially in the less formal, quickly typed, and unfortunately chock-full-o-mistakes Land of Social Media.

Ever since I saw the post that I’ve excerpted below, however, I’m always hopeful that I’ll see alot somewhere, just so that I can remember Allie Brosh’s description of alot in her post, “The Alot is Better Than You at Everything” on her blog, Hyperbole and a Half. It made me laugh more than anything else I’ve seen in months. Enjoy:

There is one grammatical mistake that I particularly enjoy encountering. It has become almost fun for me to come across people who take the phrase “a lot” and condense it down into one word, because when someone says “alot,” this is what I imagine: 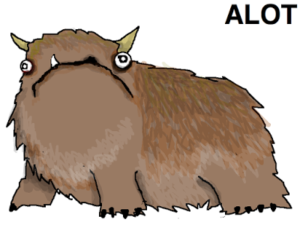 The Alot is an imaginary creature that I made up to help me deal with my compulsive need to correct other people’s grammar. It kind of looks like a cross between a bear, a yak and a pug, and it has provided hours of entertainment for me in a situation where I’d normally be left feeling angry and disillusioned with the world.

For example, when I read the sentence “I care about this alot,” this is what I imagine: 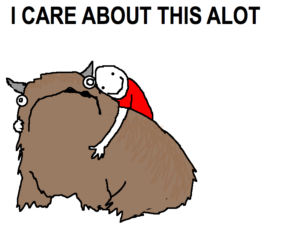 This Weird Al video is hilarious, but please know that I do not endorse his insults towards those who make writing mistakes. I am not the grammar police, even when you hire me. I’m more of a grammar counselor; my red pen is gentle. Nevertheless, if this video encourages people to see that copy editors are here to help, then thank you, Weird Al: